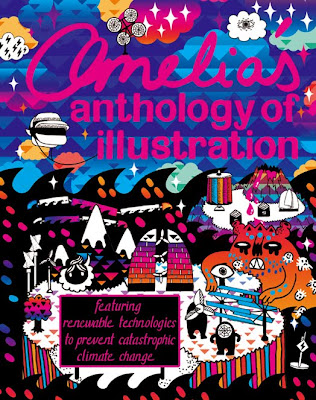 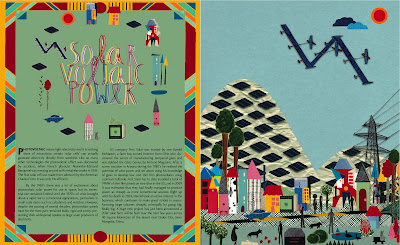 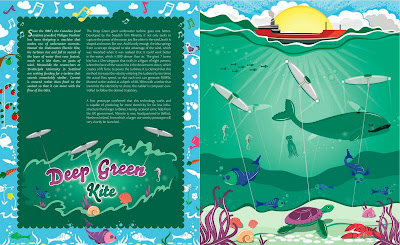 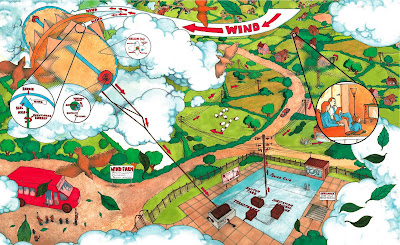 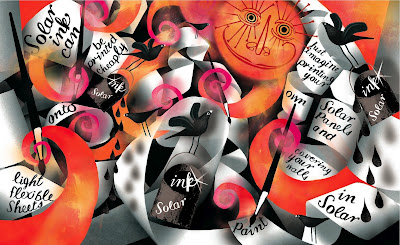 I won't beat around the bush; this is the illustration book I have been waiting for. If you're an illustrator, hell, if you're and artist, image maker or image enthusiast you need to own this book. And this is why.

For a start it breaches the all-to-familiar format of so many illustration compilations of late which simply buzz: how playful, how creative, how pretty of illustration. That is not to say there isn't some fantastic and diverse makers. Some of my favourites are Barbara Ann Gomez's vibrant images with their vivid colours, intricacy and a real feel of the handmade, as similarly I enjoyed Hannah Warren but with more of a delicacy. I poured over Jess Wilson's works, filled to bursting point with characters, animals, icons, contraptions, text and countless pop and cultural references. My mind boggled at the complex creation process in Kerry Lemon's images that combine detailed drawing (in various media), watercolour and digital manipulation. I loved the magic in the images of Yoko Furusho, the muted palette and the J-pop feel made digitally crisp. And the ultra clean, pattern-filled, colour intelligent compositions of Karolin Schnoor are particularly impressive. The list really does go on and words are no good but check out some of their blogs. Amelia wanted the best from her artists; so she got it.

What makes this best though is that Amelia set a brief for the project tackling a very current global political issue. Now I did have some initial concerns when I read the sub-title 'featuring renewable technologies to prevent catastrophic climate change', as this could so easily have become an overly-romanticised rant condemning the world unless; we the people, take charge, and love our planet, and yader, yader, yader. But the fact of the matter is that there is no overbearing moral agenda forced onto you, just truly informative articles about alternative energy sources that we could consider for the future, and it's delivered in a thoroughly entertaining way. I genuinely came out of the experience feeling more knowledgeable and dare I say: optimistic! I felt I saw real potential in the technology developed by Sky WindPower and thought the inner city car park vegetable farms, circuit board cities and quarried landscapes reformed with greenhouses were really quirky, innovative, intelligent ideas.

The Amelia's Anthology of Illustration project has been a great idea from the word go and I've not even mentioned how well the illustrations and text compliment each other, giving you such a mental picture of how these technologies work and how things may look in the future. Not to mention the fact that it acts as a great reference to some fantastic illustrators- emerging and established- and really gives you insight into working practices, experiences and of course much talk about self-promotion and motivation! This is the illustration book we've been waiting for.

What made you decide to do this project, did you decide that you wanted to make an illustration book first or did you get the idea for the brief first? (It really worked, I feel much wiser for it!)

I suppose the idea all came together at once; I've worked with illustrators a lot and knew I wanted to make a book that featured illustration, but I also knew that I didn't want it to be like any other illustration book, ie a banal 'best of' collection that said nothing about the context of illustration now. I am interested in the power of illustration to harness the imagination so somewhere along the line I thought it might be possible to combine my plans for a book with a way to show us how a possible alternative future might look. I knew I wanted to make a book that would educate at the same time as inspire, so when I found all these crazy, inventive but perfectly feasible alternative energy plans that aren't really being talked about anywhere they seemed like the perfect subject matter. And then the idea just grew organically from there.

Is there any of the renewable technologies that particularly gripped you? Sky WindPower's Flying Electric Generator sounds like a winner to me!

Well, no bias obviously, but I am sure my dad's Loose Cannon Wavepower idea is brilliant (even though he still won't tell me precisely how it works for fear of losing his right to a patent). I love the Sky WindPower technology too, probably because it just seems so fabulously insane. I think that all the flying kite technologies really grab the imagination- for instance I particularly like the KiteGen idea too- the concept of kites filling the sky to produce power just seems so very out there and unlikely that it might just happen. We never know how the future will look, and that is why it holds such an allure for artists and visionaries. There is the opportunity to be so very creative in the interpretation of the subject matter.

I know it's hard to choose but do you have any favourites amongst the illustrators you've chosen for this book?

The successful partnerships that I have formed with some of the illustrators featured in the Anthology of Illustration would definitely mark them out as my favourites, because it's really important to be able to work with art direction in a successful manner. Of course you'd have to ask the individual illustrators but I feel fairly certain that most of the ones I worked most closely with would agree that the work that we produced collaboratively was that much stronger. I am particularly pleased with the cover of the book, which was produced with Scottish student Louise McLennan, who is an absolute natural and a complete original, despite never having trained as an illustrator. She is going to be very successful. I also worked closely with another Scottish girl, Lesley Barnes, who I think it is fair to say I pushed beyond her comfort boundaries by asking her to work with lots of colour for the endpapers (it took quite a long time to get those right) and I think that she's brilliantly talented, particularly as a typographer. Mia Marie Overgaard has been an absolute diamond to work with over the past year, helping me to produce iconographic artwork for Climate Camp and capable of producing such amazing beautiful delicate illustrations. Others that stand out are Leona Clarke, again for her ability to produce fantastic work under tight art direction, Justin Wallis for the sheer genius of his vision, Thereza Rowe for her quirky papercutting and cheery disposition, Abi Daker for her truly original style and again her willingness to work to a tight schedule and art direction. There are many others - Japanese illustrators Sachiko and Yoko Furusho produce very different work that is just so immensely imaginative in it's interpretation of subject matter, and Liv Bargman has a fabulously creative way of looking at things. I am sure I could go on.... in fact I've thought of several others already, but I'll stop there!

You had an exhibition to coincide with the release of the book at Concrete Hermit with several artists from the book collaborating, is this something you would like to do more of, more curating?

In an ideal world yes, but it takes a lot of time and energy for me to do extracurricular projects, and the major limiting factor on what I can achieve is how much I can actually do on my own. Most of my time is spent dealing with the very unglamourous aspects of running a small business: coping with admin for the website and book, managing interns, and sorting out production and distribution. I don't want to give myself more than I can cope with as I have enough of a tendency to do this as it is! For now I want to concentrate on what I know I need to do to keep all my current projects afloat and viable, and also hopefully give myself a bit of space to breathe as I feel as though I have worked myself into the ground over the past few years.

So what's next for you now, what's the next project?

Well, it's January, which means it's sort-out-my-tax time; boooooring, but that's the nature of running your own business. It will probably take me several weeks to collate and sort out my paperwork even though every year I swear to myself that I will be more organised. It never happens. I also need to concentrate on getting the book distributed abroad, finding PR opportunities, checking up on sales in the UK, and chasing up unpaid invoices dating back to the magazine... lots of fun stuff like that. After that I am going to try and concentrate on making the blog as good as it can be, which will mean addressing ways in which I can make it more sustainable so that is can continue into the future successfully (as it makes no income at present) and writing for it a lot more myself. Sadly, I also need to sort out the mess in my house - 6 years of running a magazine has accumulated into toppling piles of back issues, lookbooks, postcards, boxes, cd promos and so on, so it looks more like a junk shop/warehouse than the lovely home it used to be. Then I might tackle my next book idea.... which could involve looking at how successful sustainable communities come about, but the idea is yet an unformulated plan. Tempted though I am to jump right in at the deep end again I very much need to sort out the basics of my life first! I'll post something on my website as soon as I've decided what I'm going to do so watch this space...